Showing posts from March, 2017
Show all

This weekend I'll run my 4th Rock n Roll Raleigh Race. For me, this is the race that unlocked the crazy. It was my first half marathon ever. I came back the next year for another half to improve my time. I did that.  Then last year I ran my first full marathon here. That's all after trying to resist the peer pressure to run 26.2 miles. Now I'm getting guys to upgrade to the Full Marathon. It's great.  Now, it's time to do it again. I'll run the 5k on Saturday. Rest or party at a couple of meetups. Then run the marathon on Sunday.       It's interesting this year because there are a few changes. I've done this 4 times and I can tell you that the changes are good. Instead of ending on Fayetteville street the race will start on Fayetteville Street between the state capitol building and the Duke energy Center for performing arts. It makes sense because Fayetteville Street is where everything BIG happens in Raleigh: parades, festivals, food
Post a Comment
Don't stop here, ...Read more »

My 2nd Marathon: Publix Atlanta and what a party it was 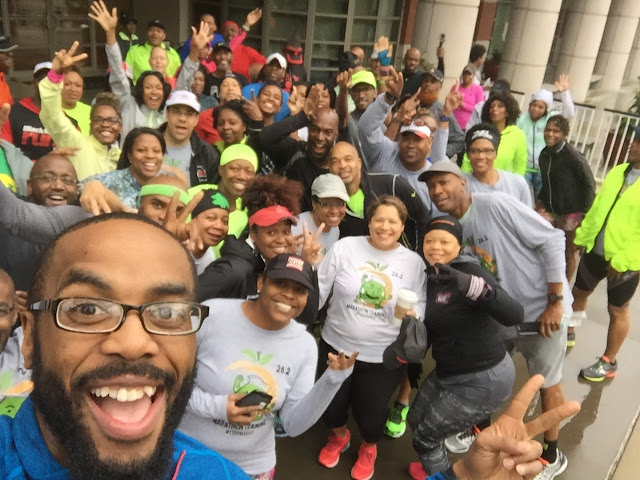 Saturday's Shakeout Run         The Publix Atlanta Marathon was one of the most amazing running experiences of my life and it had nothing to do with my finishing time. For me it all started over coffee back in November. We had heard about this Atlanta based group called Team Take Down Publix. The idea is to have the most African-American marathoners finish a race...EVER! More than 400 light, dark and milk chocolate runners.     Publix is the only marathon in Atlanta and it has a reputation as one of the hardest and hilliest courses in the south. So, why would I want to run it? Simple: peer pressure. Back to that coffee in November. After a Sunday morning group run at Buffalo road park and on the Neuse river trail,... we all met for coffee. Suddenly, there's a dozen people who say they'll run the hardest race in the south, there's a Facebook instant message group and a t-shirt design for CRuSH -- Carolina RunSquad Heroes. At least one person blames me for starting
Post a Comment
Don't stop here, ...Read more »
More posts