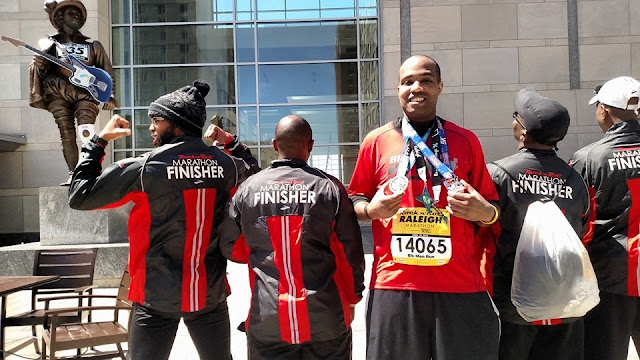 Rock n Roll Raleigh is where it all began for me three years ago and this is where it all ends! I quit. Nah, just kidding... but after completing my first half marathon here in in 2014, yesterday I completed my first full marathon. 26.2 miles. Now it's time to sit down (until Nashville on April 30th.) 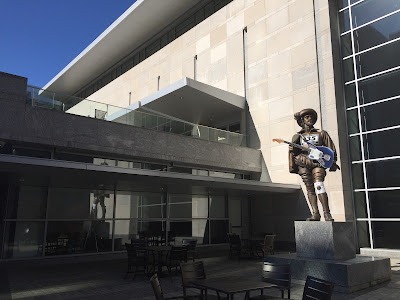 So, if you read through my race recon, you know how nervous I was. I scoped out all  the tough hills and I was ready for them. I also checked the weather. It was a chilly but not unbearable 30 degrees at start time. But Rock n Roll was really good about getting the word out... Issuing cold weather and wind advisories in the days leading up to the race.  I was really surprised. It was almost like CNN was sending breaking news messages to my inbox because let's face it,... that's all I cared about this weekend.
Well, the weekend started off with a blast. I took my son to the health and fitness expo even though he didn't want to go. He loved it. Thanks to the exhibitors, it was an interesting time ... Even for a 9 year old. We taste tested Glukos. It's was good. However, I would not as the Glukos rep recommended eat one of those tablets without water. Geico, Repreve and Toyota was cool. There's always some really good deals at the Expo. Especially on the last day. I got a chance to check out Legends compression- a North Carolina-based compression sock and sleeve company. 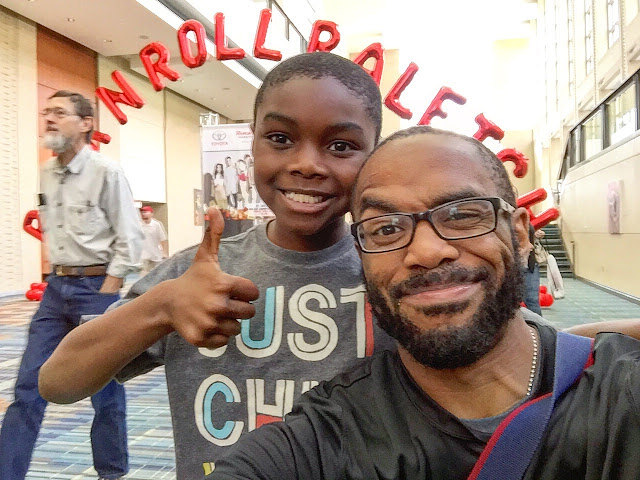 Friday night, I tried to go to the Gavin DeGraw concert. But I worked that morning and had been up since midnight. So, doors opened at 7,... I was there. But I was home by 9. I heard it was awesome. I'm going next year. 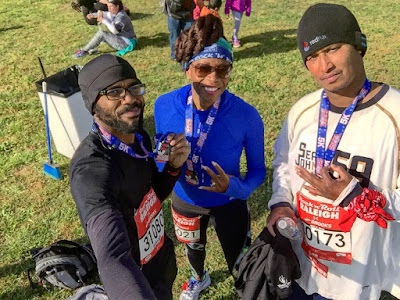 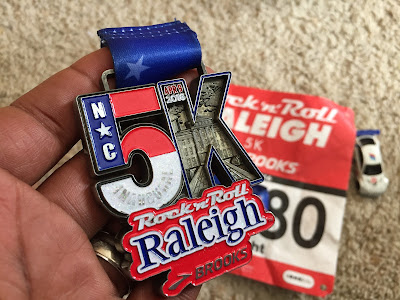 Saturday morning it was time to knock out the first half of my remix challenge. 5k at Dorothea Dix campus. Remix challenge is when you get and extra medal for running multiple races in a weekend. You don't have to run both at your fastest pace. You just have to finish. Well, my goal was to run it faster than a co-worker. It's an awesome courses that kind of tricks you into thinking you can run it faster than you can. You start out with a very slight hill then you dive-bomb down one of the park's biggest hills before you go up one of the longest. The last three-quarters of a mile : fast downhill. I finished in 22:37. Goal achieved.
In hindsight, I should have gone much slower -26 to 28 minutes- in order to keep my legs fresh for Sunday. Yes, the second half of the remix challenge: 26.2 miles. 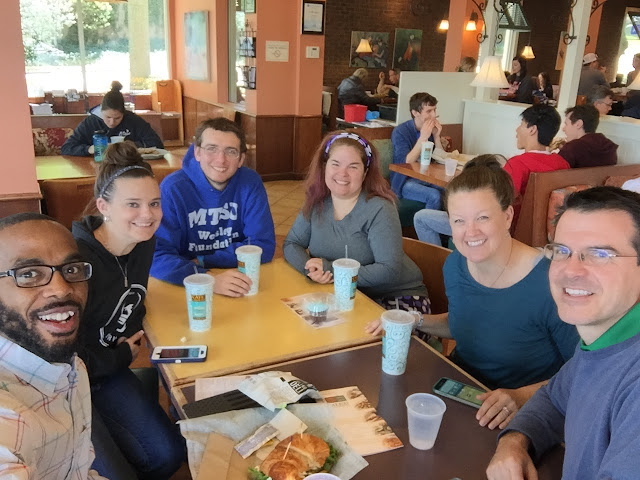 Before I get there it was time to get social- Meet up with some of the other Rock n Bloggers for lunch at the Carolina Cafe. It was cool. We talked about everything from the crazy weather in Raleigh to dream races and travels dilemmas. 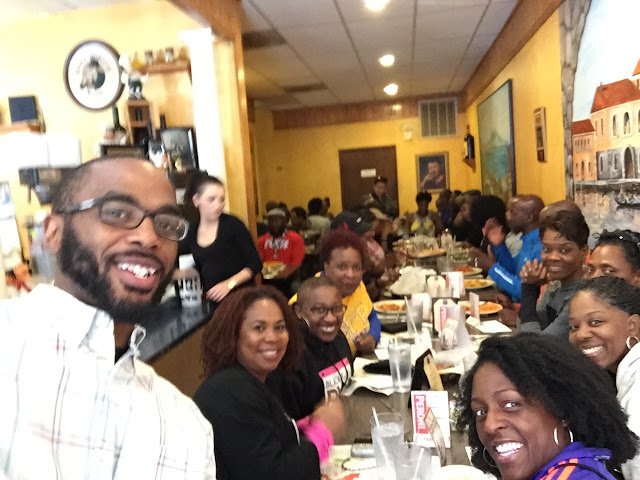 Then it was off to another meet up with BlackMen Run, Black Girls Run and the National Black Marathoners association. We basically took over this restaurant. There may have been four tables left in Vic's Italian restaurant that weren't occupied by runners. It was cool being able to put faces to Facebook profile pics and Instagram accounts. 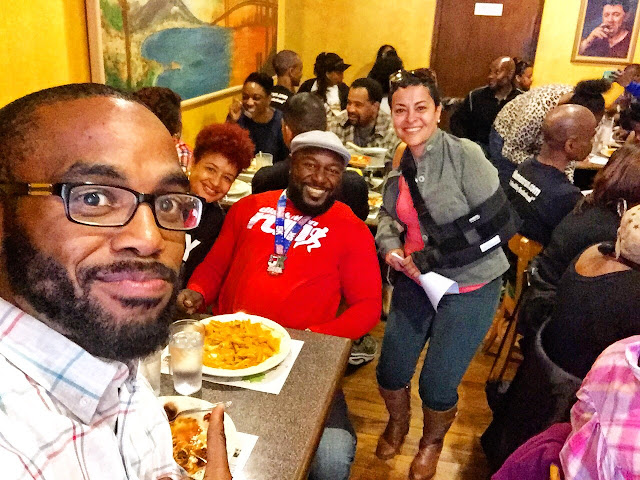 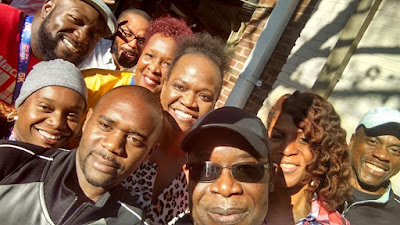 I was still tired, so back home to relax and plan for the next morning. My first full marathon. Packed and ready to go. I probably packed too much, but I had a VIP pass (thanks rock n blog) so I wasn't too worried.
Sunday morning comes quick when you sleep like a rock. Good times. By the way: car pool is the way to go with a Rock n Roll race if you can. I suggest car pooling with someone else and splitting the cost of parking.
We parked right next to Elvis. No, I'm serious. A guy in an Elvis suit was right next to me. Navigating the start line zone was pretty easy on race morning. Maybe it's because this is my third one. But we were able to get to gear check and take our pre-race photos without a problem. I rolled out of VIP after the star spangled banner and before the first runners took off. PERFECT considering the temperature. Then as I was standing out there with 9 thousand other people, I realized it wasn't that cold. 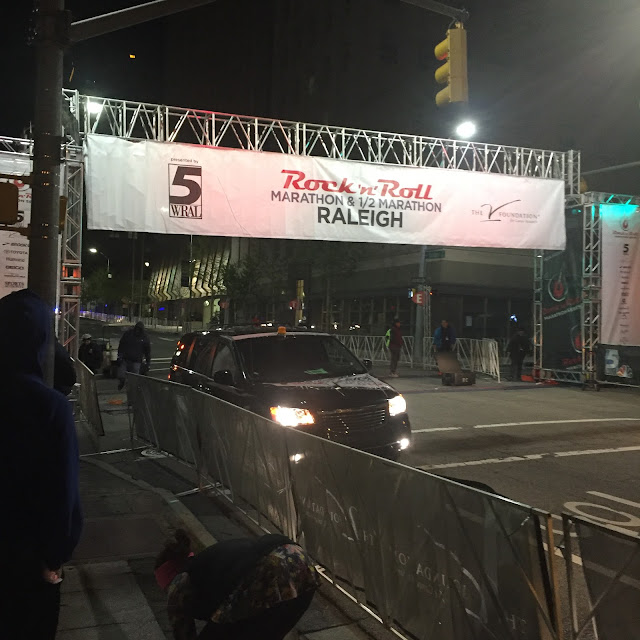 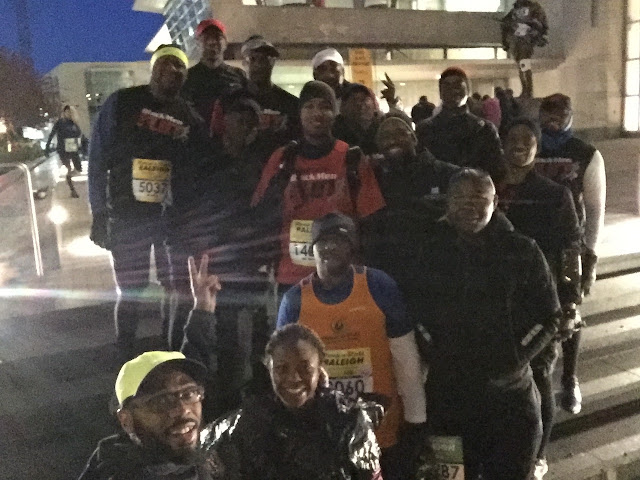 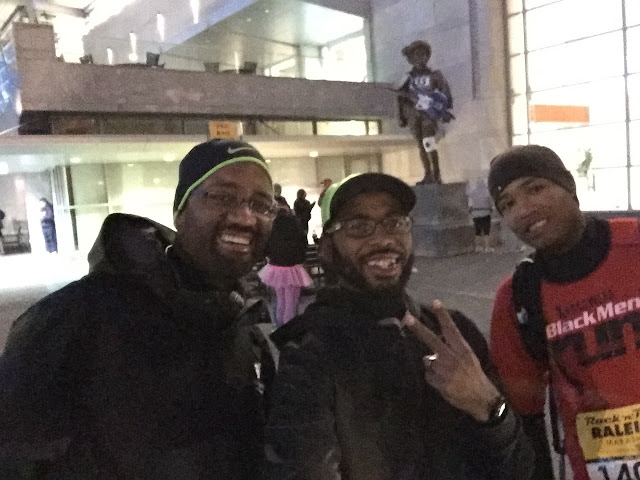 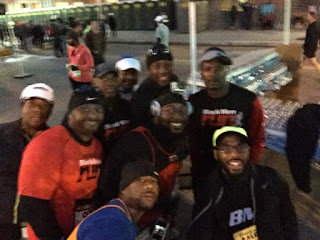 The start of the race was weird. I can't believe I was running a full marathon instead of the half. Until the racers split off at mile 8, all of the scenery is the same... So it was all very familiar.
We ran by the North Carolina Museum of Natural Sciences and that big iconic globe. We ran past the governor's residence, Moore Square and the big Acorn.
Then as we ran past the Shaw University marching band something unexpected happened. My headphones gave me a warning: battery low (in a British accent.) 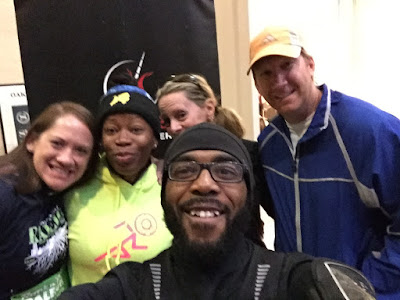 Everything was going well so far. I lost my favorite headphones after the 5k, but I brought two pair of backup headphones.
You've got to be kidding me. Now I remember why I stopped using these. I should have grabbed the other pair. I had a 50/50 chance.
Maybe it's a blessing in disguise. I've run without music plenty of times before, so I ditched them and started actually enjoying the crowds, the music and entertaining people.
I'm not going to promise that I'll go without headphones for every race, but if I return for another full marathon I'll keep the music off-- or really low --until the second half.
The leprechaun with the man on his shoulders is where it began. 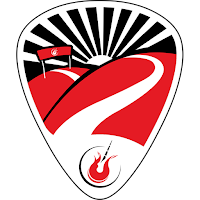 I enjoyed the music  through the Oakwood neighborhood,... The cheers up Glasscock Street and the drums on Peace Street. The biggest and loudest was on Hillsborough street right where the Marathon and half split for the first time. There were some bands that rocked, but seemed to be warming up as we passed.
Running by the WRAL aid station was really cool. It's part of the reason why I did this race -- even though it was a challenge. I wanted to see my family and friends along the race course. That was mile 13ish. 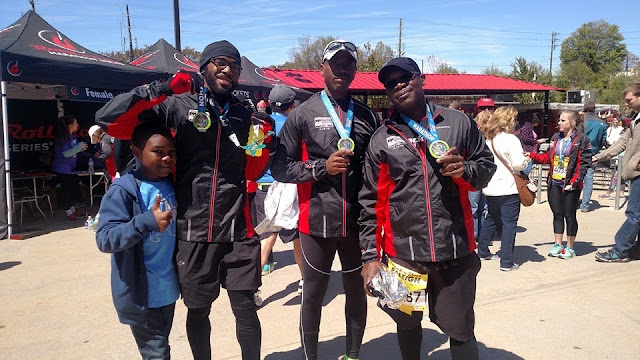 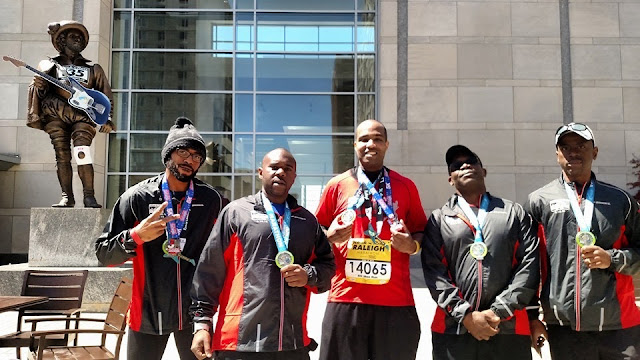 I fell apart after that. My feet started hurting,... Then I started to cramp up. The bagpipe band at NC State could've been playing the soundtrack for my demise.
Just kidding they sounded great. Then it was on to Avent Ferry road. The beginning of the real rolling hills. The next really good band was at Lake Johnson right at the bottom of the hill. I stopped and walked for this one. Actually, I walked and ran a good majority of the second half of the race. 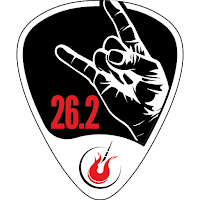 See, I started out too fast. I didn't realize it but the 4 hour pacers were behind me. They caught and passed me around mile 10 or 11.
Those  hills on miles 17 through 20 deserve some respect. I mean, really. I'm coming for those hills next year or next time I run this as a marathon.
At some point I decided to turn my music on in my phone even though my headphones weren't working.
It's all a blur after that really. When we rejoined the half marathon route at Dorothea Dix, I noticed that there were no more half marathon runners or walkers. 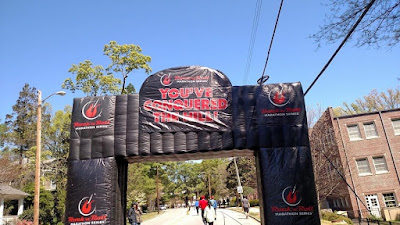 That hill on Boylan Ave needs to stay. I like the inflatable marker for that hill. Actually, all the hills need to stay because I'm coming back for them one day.
Crossing the finish line was amazing. Last year, I said I'd never do a marathon. Now I'm thinking about my next two races.
Many lessons learned.
First marathon done.
It's too bad the band was wrapping up their concert as I was picking up my finisher's jacket, but 4:44 minutes is a long time. People were headed to the airport by the time is got my medal. Raleigh is definitely a beautiful city. Their finishers zone is pretty unique because the amphitheater allows runners to sit while they watch the concert. The other races I've been to have a concert as well, but you're on your own to either sit on the ground or stand. 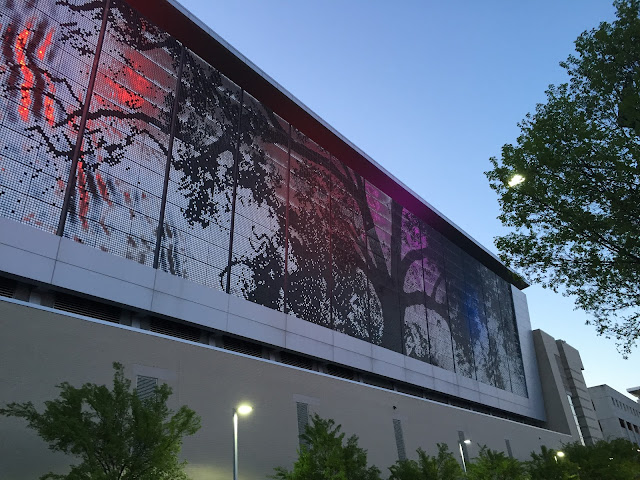