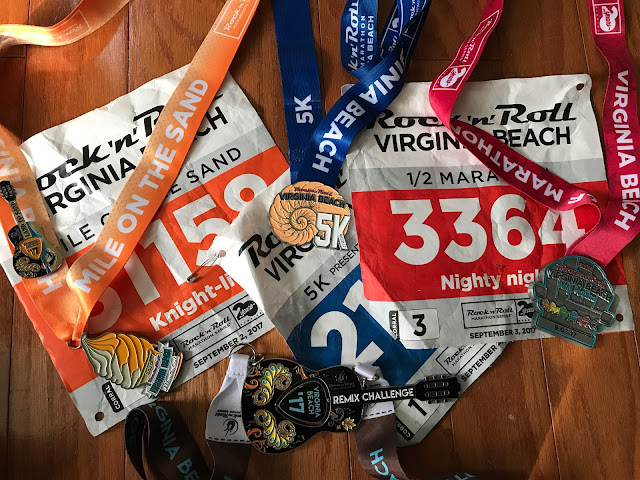 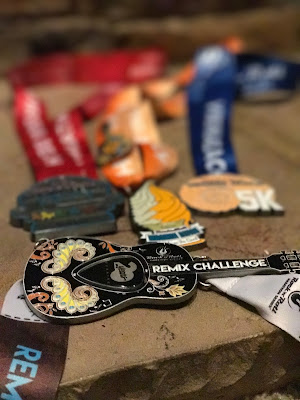 Alright, it's time to talk about Rock n roll Virginia Beach 2017. I think I said it on Instagram: it was a weekend of highs and lows. Yup.... one really low, low. I signed up for three races: The 5k and the mile in the sand on Saturday and the half marathon on Sunday. It sounds like a lot, right? But, You all know I'm a rock n blogger. That means I'm an ambassador for Rock n roll. We get free access to all the races if we chose to run them. So,... I decided to run. You may also know that last year's race was hindered by a hurricane. They cancelled the mile in the sand. 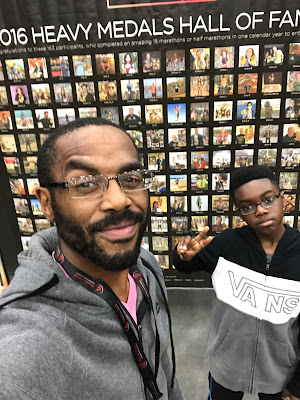 This year it was a family trip for Labor Day weekend and for The last weekend of summer. I love the expo, but I almost always seem to arrive when the expo is shutting down. So I slide into the expo with about 1 hour to grab 3 bibs and make my way through the maze of goodies. We were picking up free bags left and right as usual. I kind of wish those bags were available for the finish line chute when you're trying to hold a bottle of water, a banana, Gatorade, pretzels, an energy bar and chocolate milk. I never have enough fingers or hands. Anyway, back to the expo-- I grab an obligatory souvenir.
This time I pick a magnet instead of a drink glass. I would later notice that these items are discounted at the finish line. I won't forget that. 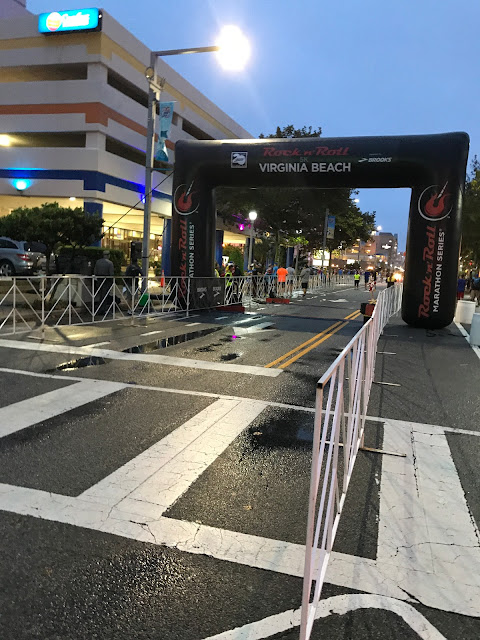 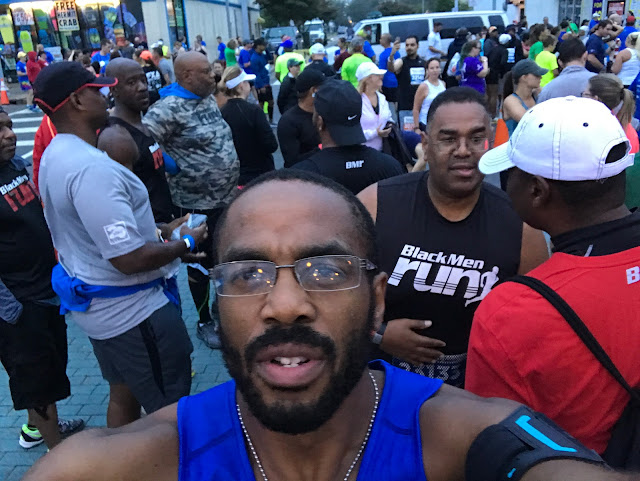 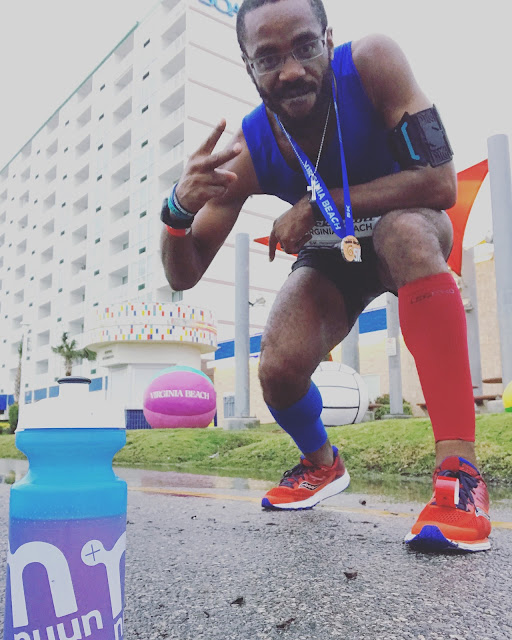 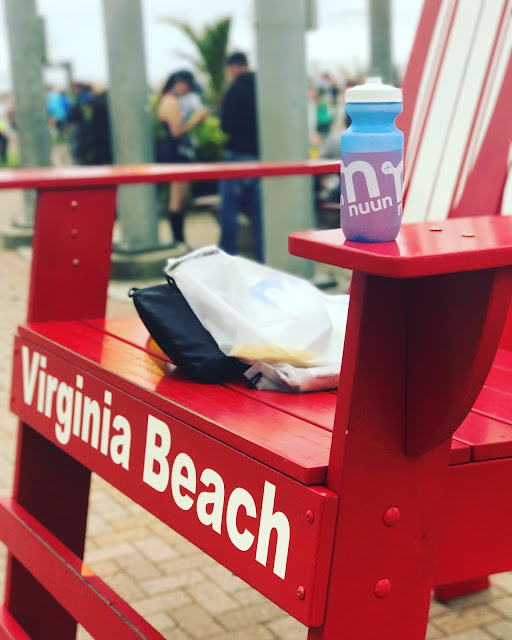 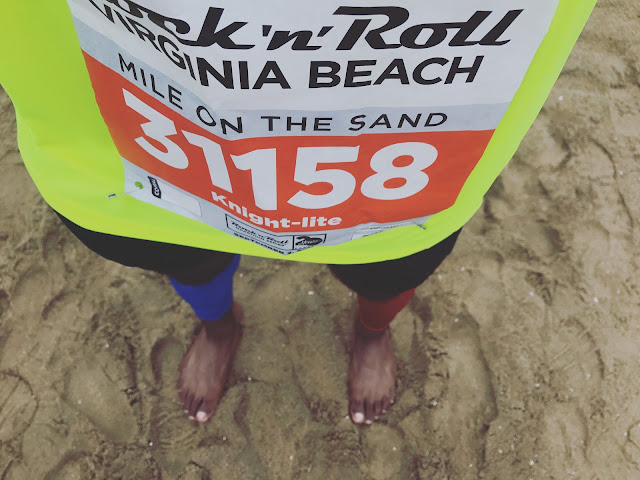 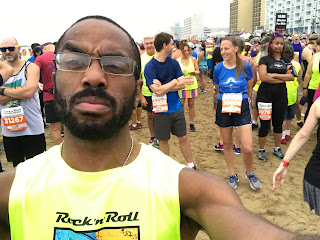 Saturday, it's time to get ready for the first races. First up the 5k. 7am. I wanted to take it easy,... so I did.  I still line up in the 1st corral. Here's when I noticed a weird feeling in my hamstring. It wasn't a cramp, it wasn't a Charlie horse, but just a dull pain. It kinda felt like I needed a massage. The pain only really set in when I stretched. For the race... It was perfect weather. The rain had just stopped. So it was cool, but breezy. The wind really knocked you in the face when you run past a break in the hotels. (The hotels at Virginia Beach act as a shield for the wind coming off the ocean.) After the turnaround we ran onto the boardwalk and right into the wind. Not a problem at all. I expected this though. When you run at the beach you have to expect some wind. 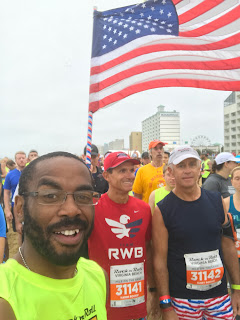 So,I finished with a respectable time. Not my fastest, but I was pacing myself. So, instead of wearing the bibs for both races, I put extra clothes and the second bib in a bag for gear check. The only decision I struggled with was running in the sand with or without shoes.
The cons of running in shoes: getting sand in your shoes, the weight,  they make you more clumsy, if it's hot... burning your feet. (But it wasn't hot) 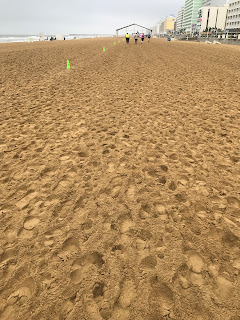 The pros: baywatch.... I mean you get to connect with the beach, feel sand in your toes, you're less likely to trip, the sand stays at the beach and not in your shoes, car or tub.
By the way: the mile in the sand sleeveless t-shirts were so cool I had to wear mine on race day. You know "sun's out, guns out." A welcome change to race day gear. 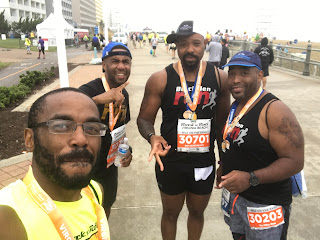 I chose no shoes and it was amazing. When I started running, I thought it would be better to step in someone else's tracks... but I was wrong. I quickly switched my strategy and found the flattened areas of sand to run in. Then I just had to work on lifting my knees and maintaining form to the finish line. Focus. I finished well-- first in my heat. I wish I had run in a different group to be more competitive. 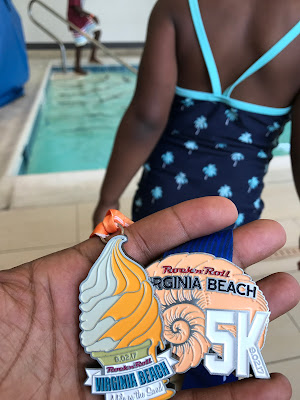 After these two races, I was happy, but I just didn't feel right in my hamstring. So I stretched, rested and called for an ice bath. There are no pictures of this but just imagine Ethan running down the hotel halls filling up ice buckets,... and expo bags with water and dumping the ice into ice cold water for his dad. It was fun. But it didn't work for me. The next morning, I still felt a weird numb pain in my quad and tried to stretch it out and warm it up as best I could. 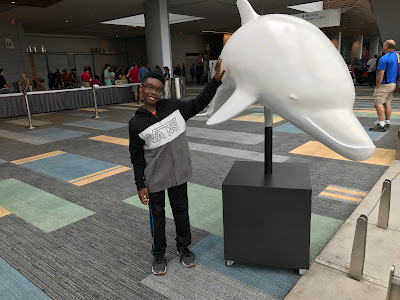 By race time it was too late. The first four miles were okay. I had resigned myself to deal with the weird pain for the rest of the race .... then the hamstring just let go and stopped me in my tracks. If you've had an injury, you know what I'm talking about. It's an instant pain that makes you hop on one leg, grab the other and pull off to the side of the road. 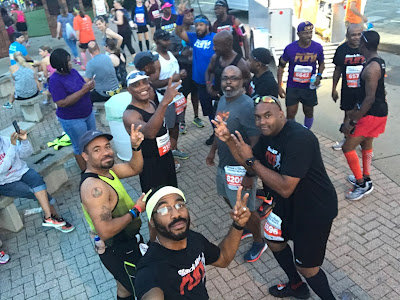 I walked and ran for 9 more excruciating miles. In the end, I wasn't tired but hurt. I had plenty of energy, I didn't feel dehydrated just in pain. One of my BMR brothers helped me get across the finish line. I was going to walk, but I didn't. I fought through the pain and finished. Later, I hobbled into the medical tent for ice. 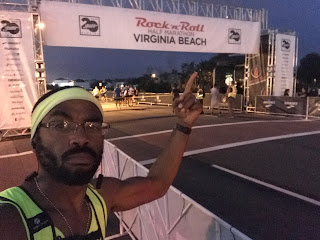 So that's how Virginia Beach ended. Four medals, a pin and a bag of ice in the medical tent just as my calf decided to cramp up. That's not a ringing endorsement for running but it was still a great weekend. My wife asked me how I still run when I'm in pain. I don't really have an answer. I just want to finish what I started. Never give up. Keep moving. Don't stop. Give your all. 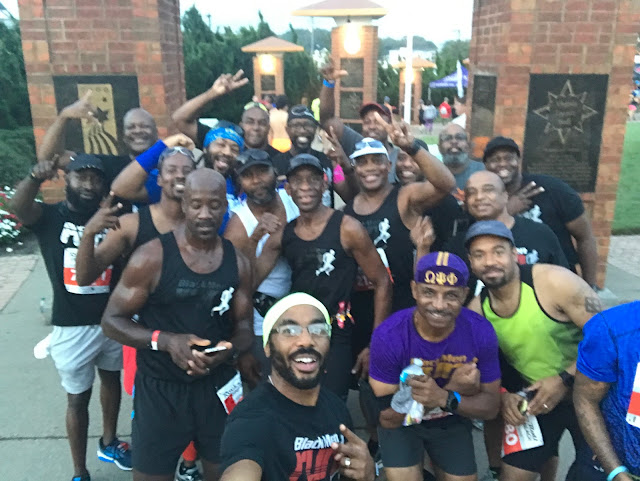