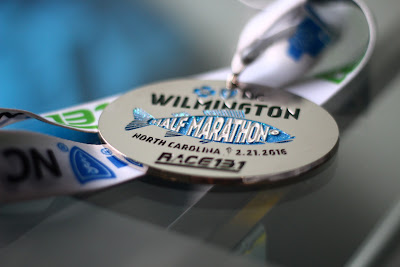 If you've been following along, Charlotte was a really bad race for me. It was the low point in my half marathon running career. Cramps, 15 minutes off my goal pace and a painful finish. That race has been fuel for the fire within me. Every time I run, Every time I feel like skipping a workout or taking it easy on the plyo and strength workouts, I think about Charlotte. But that is now the past!
Five months and three races later, I'm back. After listening to other runners, doing research on cramping/hydration/nutrition and adding to my workout routine... I'm back.

The First Half Marathon of the year is the Race 13.1 Wilmington -- advertised as a flat fast course. Wilmington, NC is 2 hours away from my house. So, the plan was for a BMR/BGR road trip. Three guys and one girl in the Camaro with plans to crush some goals on the streets of Wilmington. 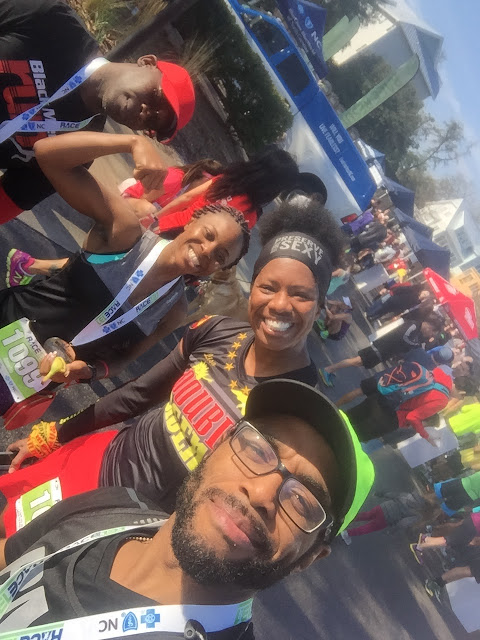 We started out on the road at around 3:00am and rolled into Wilmington's Lumina Station just before packet pick-up. Shout out to Carlos, Matthew and Amelia for keeping me company. Carlos especially for riding shot-gun and keeping a brother awake.
Just before race start time, we did a temperature check and it was already around 50 degrees. It felt a little chilly, but not cold enough for me to break out the pants or long sleeves. The only debate in my mind was: with or without gloves. I ran without gloves. I thought that was a mistake in the beginning because my hands started to get cold. But it turned out to be a good decision because it was around 70 degrees at the finish line.
Warm-up run, hydration, pre-race snack -- check, check, check.
At this point, I've done everything possible to make sure I run this race under 2 hours. So, It's time to head to the start/Finish line.
I didn't start out too fast. First mile in 8 minutes 45 seconds.  The first mile is always mentally the toughest for me. On this day, I forced myself to ignore the pace and cadence of the runners around me and focus on my own comfortable pace and stride. The only thing that makes this strategy hard is when slower runners are in front of me or when you get a group of running friends who decide to run shoulder to shoulder - all the way across the running path. 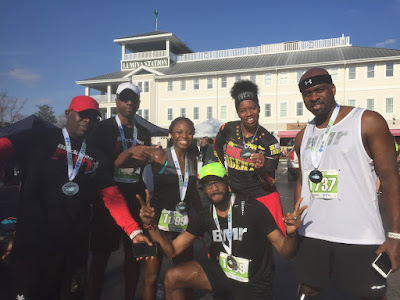 I'm trying to remember when the pack started to thin out. I think it was after we turned onto the greenway to make our way toward UNC-Wilmington. Mostly, the pack started to thin out as we passed by Water/Aid stations. I kept moving past them because of my pre-race hydration plan with Nuun Energy and Nuun Plus tabs. I completely skipped the gatorade and took some water along the way. At one point.. when we crossed the street on UNC-Wilmington's campus... a police officer  let a bus go behind me. So, I didn't look behind me, but I know there was a gap big enough for a charter bus. 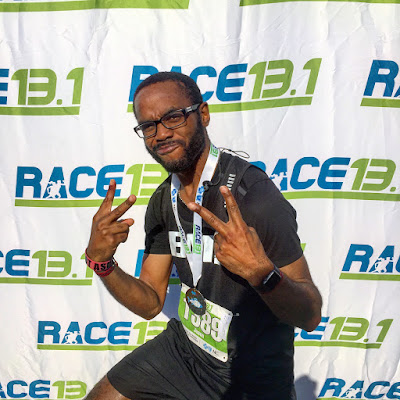 Anyway, I was able to record negative splits all the way up to mile five. I fell off a little on split times. But amazingly, I never dropped below 8:45 per miles until the very last mile. It was strange to run in a city that I don't know,.. but it was also very refreshing. I did research the race course but didn't see any major hills that I should be concerned about.
I'm a fan of race courses that don't do too many out and backs or turnarounds, But I thought it was kind of cool in this case. You don't have too many people out lining the street to cheer you on, but there were 3 areas where the runners were looping around and passing each other going the other way.   So, it was a good opportunity to cheer on fellow runners and see how you are ranking against the rest of the field. It was cool to see so many runners cheering each other on. 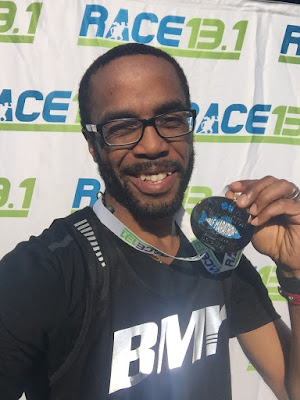 So, everything was going according to plan until the last mile. The very last mile. My pace went from 8:43 to 9:15 per mile. I think it was all mental. I was a little nervous about cramping. I kept doing mental checks on my legs, my stride, my cadence. I was also thinking about my knee. Yes, I ran this race with a knee pain. It started earlier in the week. But I still stuck to my run schedule. The pain would go away after the first mile. After running, I would ice it and take an anti-inflammatory pill. Right now, I'm one or two days away from contacting a doctor.
Anyway, I finished with a PR -1:53:57.
The 30 seconds that I lost in the last mile wouldn't have made a huge difference,.. but I ran a conservative race toward the end instead of picking up my pace and pushing hard.
I'm happy with the results. 173 overall out of 607 runners.
Only 281 men ran the race. I was 122.
Only 43 people in my age group ran the race -- and I came in 25th.
The next challenge was finding a place to freshen up before the ride home. That's another story.
On to the next race. That'll be a big one. I'm going to Rock N' Roll DC on March 12th. Who's rolling with me? 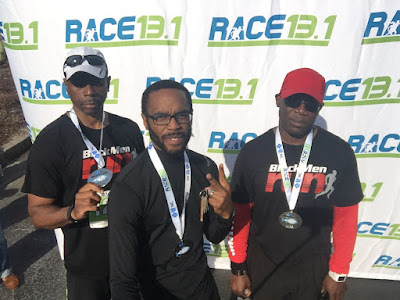 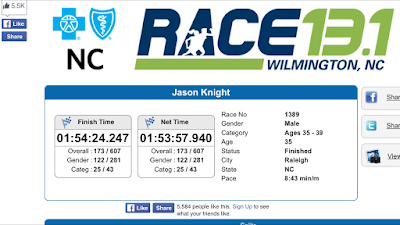 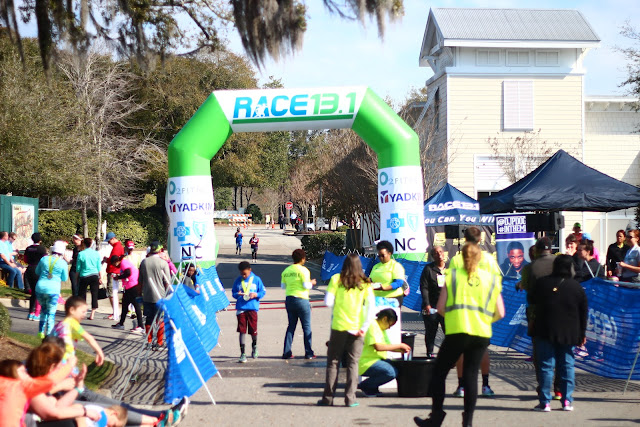 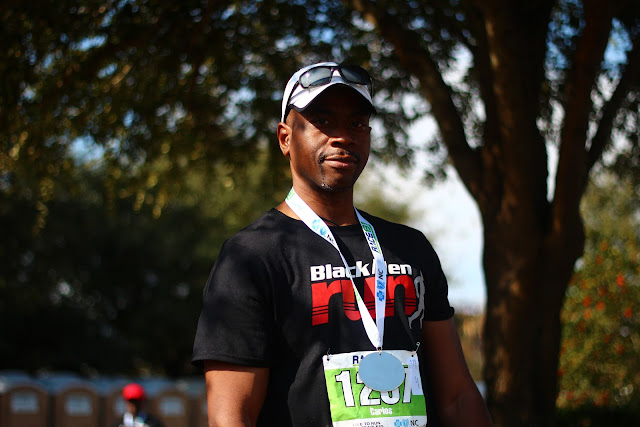 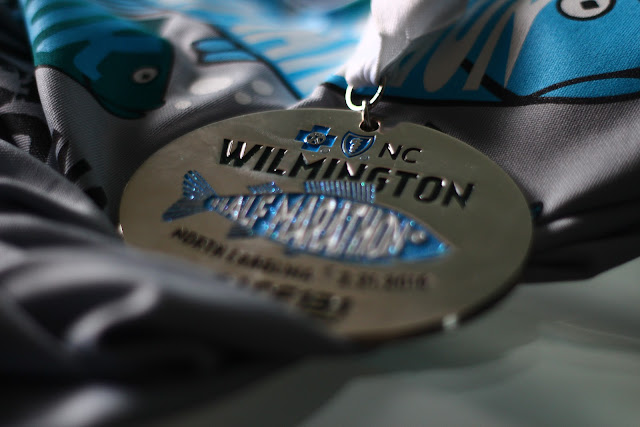 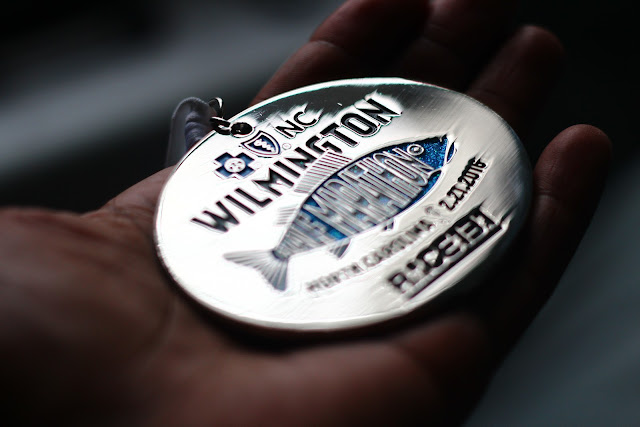