More thoughts: Nashville and Knoxville, The self assessment 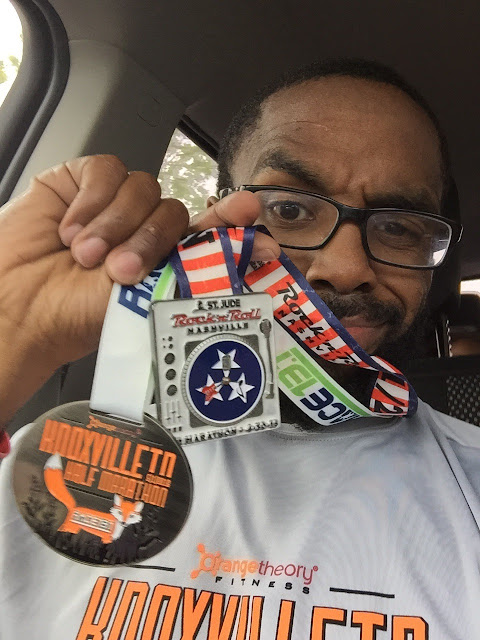 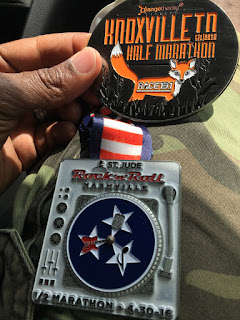 It's been a week since my crazy two race weekend.
There were a lot of factors that were in my control or anyone's control. One of those factors happens to be the weather. Why didn't I take a picture during the downpour as people huddled for cover? I know the answer to that. It started to rain after I did my warm up. So, I was in full race mode. I was trying to put my game face on. Plus, after a couple of phone battery issues,... I wasn't going to touch it until the race was done. I guess I was a little too cautious. A. If win for this race, my phone didn't die and my headphones didn't die or get lost. ( I'm still sad about my MeeAudio X7s- water proof and long lasting)
All of the things that I can control: Food, sleep, running gear, arrival time, parking were all on point for Nashville. But I kind of messed up on Knoxville. I wanted to make sure my family enjoyed this new city even though I was in a deep state of exhaustion. I did so much walking and touring around the city after the race that I did something that I have never done on NikeFuel. I won the perfect day trophy which means I was active for 16 hours in one day. Craziness.
I probably should have reduced my expectations for both races.
After a few slower than normal training runs, and trying to dodge an office cold..I didn't feel my best at the starting line. In fact I felt my best about a week before Nashville. Sometimes it's hard to avoid sick people at work, homes, parks, kids neighbors. You get real paranoid of any cough or sneeze around race time. 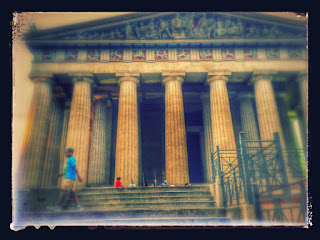 I think I did catch something.
There's no way I got enough rest between races, from touring the city to staying up late, to getting up early for the 2.5 hour drive.. I was still exhausted four days after the race.
Nutrition and hydration between races was bad. I'll just leave that there.  I needed more race fuel between races to replenish what was lost and give my body enough nutrients to do it again.
I also didn't hydrate enough.... And actually I drank coffee before Knoxville. I never drink coffee before a race. It'll dehydrate you and make you want to go to the bathroom.
I'm surprised I didn't have GI distress....oh wait I did.
If you read my previous post, I barely made it with enough time to get my bib and pin it on,... So no Porto potty break before the race.
Pace
Let's talk about the amount of people running. 20 thousand people running a race in any city is an awesome accomplishment for Rock n Roll. I love that they start everyone in corals. That puts the fastest runners out in front. Generally, I like to stick with my coral. I've moved into a different coral once to start with friends. I've been in the wrong coral because the volunteer holding the coral sign didn't understand that he was supposed to move up as the crowd moved up. I've never seen anyone singled out on race day for being in the wrong coral. I think that's awesome. You are on the honor system on race day. If you look around, most people follow the rules. I put myself in the 2 hour group because it's a new city and I wasn't sure what I was getting into. I should've put myself in a faster coral/pace group.
If you watch my video from Nashville ( I strapped a GoPro to my chest and let it record the first three miles and the last two or three miles.) you only have to watch the for two minutes to see how many people in had to get around. It took my twice as long to get anywhere close to my normal pace. 6 miles instead of two or three. By then I was frustrated. I had lost so much time and Mojo. Seconds are easy to make up at the end. Minutes are not. Now I'm being passed and we're getting near some of the challenging hills.  Pace is important to me. I can tell how I feel in comparison to how fast I'm actually going (effort.)

I want to return to Nashville one day to show those hills who's boss. These are the things I beat myself up about after a race.
Knoxville was a different story. No crowds, no rain. Plenty of heat. Not enough hydration and hills. Really, the hills in both locations were no worse that running at Umstead park in Raleigh. But it was a psychological thing. It was the second day of running blind. I kind of knew where the hills where going to be. Then I saw one of those hills. I was going down that steep hill. What made that hill different, was the fact that I knew I'd be running back up it.
On this day, I didn't want it bad enough. Conclusion.. Too hot, not enough hydration.
So, one week later... I no longer want to quit running. I'm at peace with those two accomplishments. It was a great family weekend. Memories were made. That's all that matters.
Would I run two half marathons I n one weekend again? Yes, but only if I have more control over my environment. That means it'd have to be a race close to home or I'd have to be traveling alone.
I'll do it again. But, not this year.