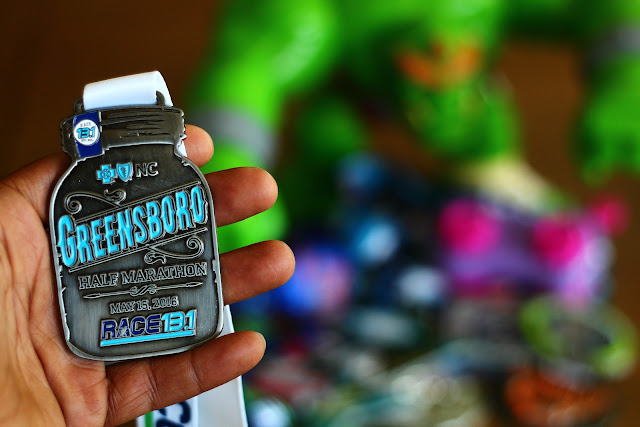 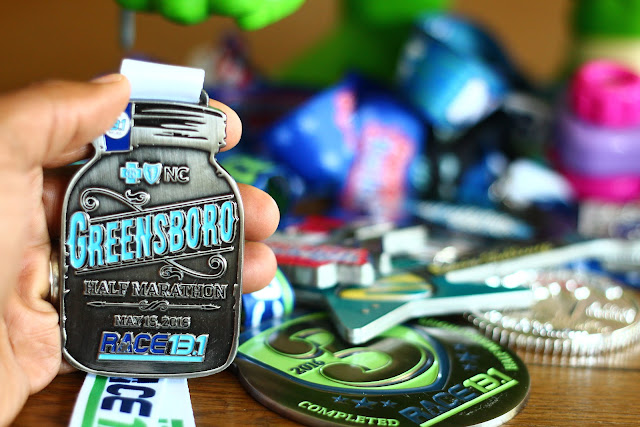 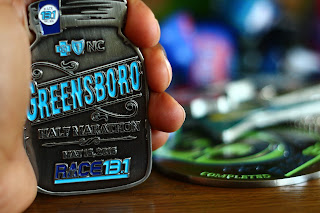 I don't want to say the race was awesome just because I walked away with a PR and still felt enough strength in my legs to do a happy dance. But I did get a PR. I Finished with an official time I'd 1:48:41 although Nike+ had me finished much earlier at 1:45. This all scares me. Because I know I'll want to beat that time. Then I'll want to beat that time. I just have to keep working harder and smarter ( not longer)to prevent a plateau or injuries.
Let's talk about the race 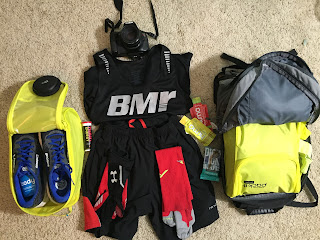 I woke up a zero dark 30. Actually, it was 3:15. I had packed the night before. I didn't used to put too much though for emphasis on preparing for a race the night before. Why? Because I did track in high school. All I did was wake up throw on my uniform, get my Gatorade ( now it's Nuun) and get I the car.
Now, I make sure the main running gear is set, post run dry gear is set and I have backup clothes in case the weather isn't as expected. Or it is as expected but feels warmer or colder when I step to the line.
What else? Make sure everything is charged,
PackIt Sport from EagleCreek Gear makes that so easy.
It's also easier to leave in the middle of the night without waking your wife and kids.
So, that made it all easy to jump in the car and get on the road.
I added a surprise to my packing gear that I'll share later.
The drive into the city was really easy. (thank you OnStar Nav) There is no one I the road at that time I the morning.  Even the club hoppers are home by 4 and 5AM. 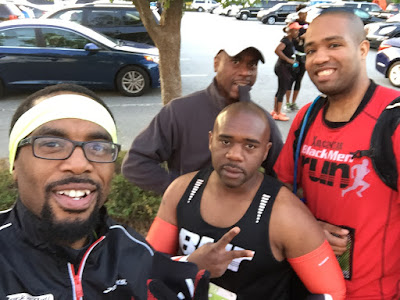 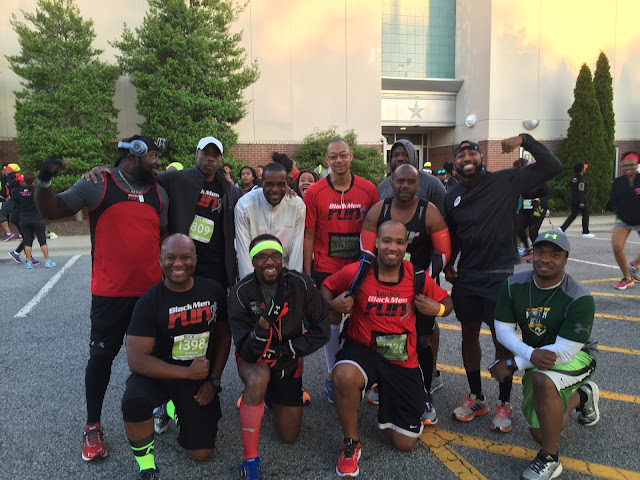 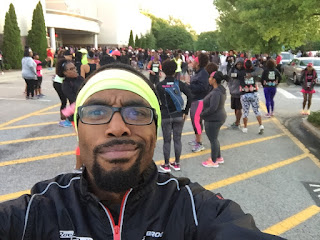 I made it to Packet pickup after getting lost. Well, not really. I just couldn't find the start finish line. It was BEHIND the Apple Store. ( thanks OnStar, SMH)
Still, I had Plenty of time.
I was the First one in the Porto potty twice. There is something special about that feeling. No gross smells or mystery fluids except your own.
Then I do what I always do. Wait. I'm always early for the race. Eventually, the parking lot filled up.
This was Black Girls Run's national meet up and they showed up.
Their picture or gathering in front of the movie theater was massive.
Black Men Run also represented.  It was very encouraging to see all of my chocolate sistahs and brothas out for a run. I've never seen anything like it.
I got out and did a less than one mile warmup. Just a small random loop. I didn't want to get lost. 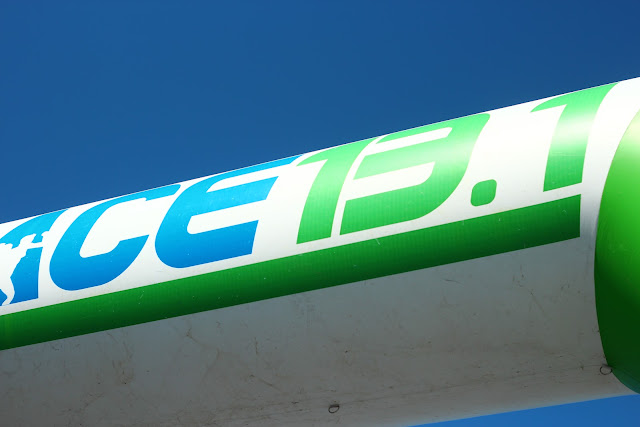 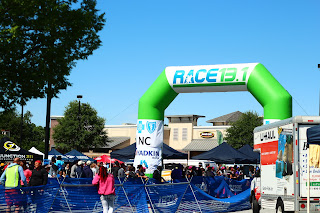 I made it to the Start line right on time. I don't know about you, but it seems like time goes by faster at the start line. You go from the national anthem to fixing your music to starting your running app in what feels like a span of two minutes. Then your off.
Got in between the 1:45 and 2:00 pacers. It was perfect.
I was chasing some fast people young and old. Can I really hang with them? YES.
I kept listening for my split updates and I was shocked.
Then I realized I felt good. So, I  kept pushing the pace.
I knew that the main hills were in the beginning and end.  Plan accordingly.
The first hill just warmed up my legs.
It was followed by some rollers. But nothing too serious.
In the first four miles I was chasing. I just wanted to keep this lead pack in my sights. They pulled away a little but I was happy with my pace so I let them go. 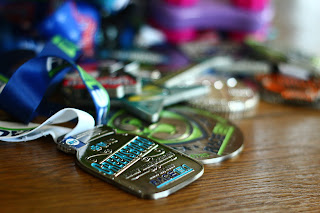 Mistake? Maybe. Maybe not.
Then I was following runners with the occasional pass.
After the turnaround at the top of that middle hill, I was in full predator pass mode-- Picking people off and passing. I made sure to encourage those that I had been following to let them know how much they helped me. One guy had stopped at an aide station to clean Gu off his hands and I told him, "Come on,get up there I've been following you!"
He laughed it off and shot back up in front of me. I eventually passed him but only because he got stuck in two way traffic on a narrow portion of the trail.
The last 3 miles I was almost afraid to kick it up. This is where I've had trouble in the past with cramps and lack of energy. 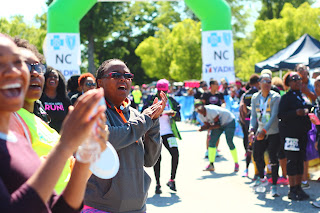 Then another brother passes me. Well, he doesn't pass me with authority. He pulls up on my shoulder and tries to pass me but something inside of me said - NO, not this time. Two miles to go and I take off on him.  1.5 to go and he's back. I said, NO yet again. 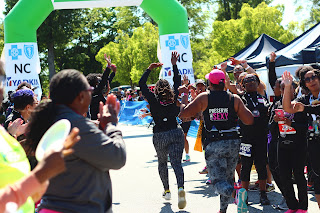 I started to think of the book "Run Like a Champion" by Alan Culpepper. How do people run at such a high in testify level?
I knew he'd be back again at 1 mile to go. Now we are full on racing side by side and trying to avoid traffic from the 5k and the 10k. At this point I knew I had more left in me but I held back. Half mile to go and I gave  it all I had --- but He had more I the tank after a slight up hill climb to the finish. 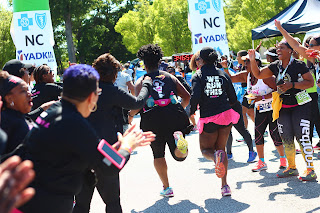 At that point I could've turned off my headphones and just went for it.
It was a fun two miles. That last mile could've been my fastest. I missed that by ten seconds.
I came in 101st place out of 14-hundred runners ( I could have been 100 or even 99), 71st out of 300 men and 17th in my age group. That's one of my highest finishes.
I think I could've finished stronger without my headphones in the last two miles. My music playlist was on point this time around but I do think it can slow you down especially when you're trying to listen to the music and updates from a running app. It makes it hard to gauge how close your competition is and how close the finish line is. You can listen to your body and You can also get a boost from the crowd as you bring it home. 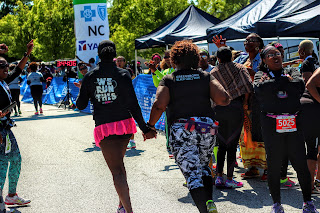 Afterward, I couldn't even be mad at myself. I looked at the clock and I had just beat my personal best time by 5 minutes.
I don't know if the cameras caught my excitement. I don't think people at the finish line could understand a man crossing the finish with so much excitement-- so far behind everyone.
It's validation of hard work, sacrifice and dedication. All those strength exercises, diet changes, reading and blogging weren't for nothing.
It didn't all hit me at once, but I knew I had done something right this time.
I really haven't done enough races to get it yet,... But I'm getting there.
Afterward, you may have seen me celebrating, dancing (running man), laughing and eating. Just know that I'm not crazy, that's just me. With all of that celebrating I couldn't believe how strong my legs felt after pushing so hard at the end. I owe it to hydration, nutrition, rest and training. 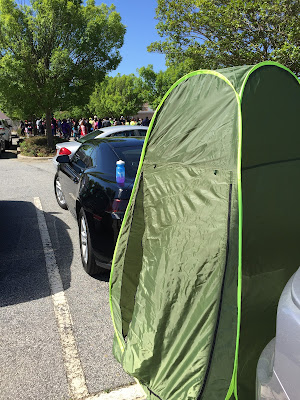 Oh, so I brought a surprise with me for the post race party. I am so tired of the funky ride home -- even on short trips like this. I can always change my shorts and shirt, but underwear is always a problem. The solution is the pop up dressing room. It's sold on Amazon in the camping section. I think it's perfect for runners. You pop this out of your trunk. Put it on the ground. Anchor it so it doesn't fly away before you finish changing. If you need to, have a friend stand look out. Step in, zip it closed and change ALL of your clothes. You can even take wipes with for a really real fresh feeling and experience.
It's better than finding a gas station restroom to change in ( especially in North Carolina, lol.) You also keep your car seats clean. Plus I have limited space in my car.
I'm not trying to sell these. I have no deals with the company. I've had mine for two years and this is the first time that it dawned on me to use it like this. Now, for colder days,... You might want to think of other options. I felt weird about it at first, but don't knock it,.. Until you've tried it. 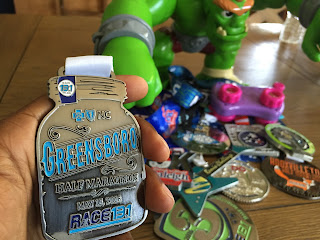 I've gone on a no lactose diet. Thanks to the book 'The Runner's Fix' by Pip Taylor - I've identified a possible food sensitivity in Lactose. I'm not calling it an allergy. But I have been feeling really strong. I still have 2 weeks to go without lactose.
The weather was cold-- great running weather
The stress was lower 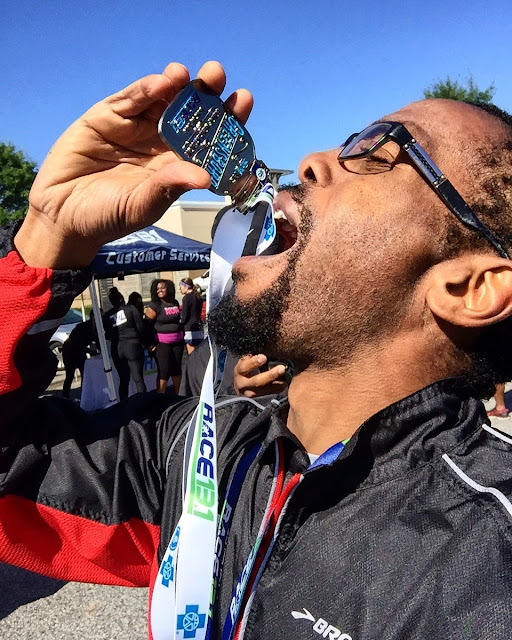 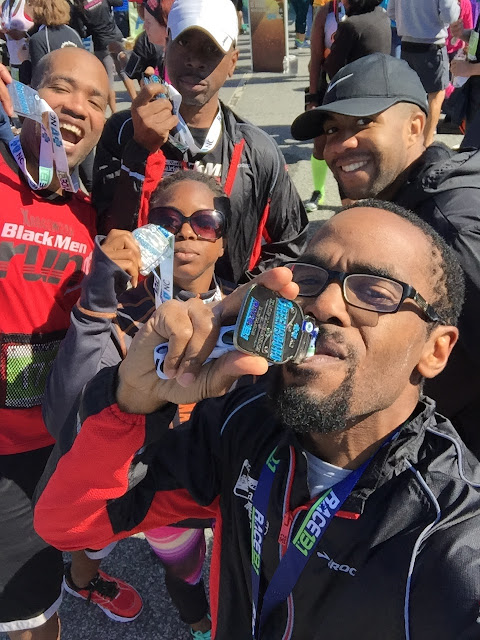 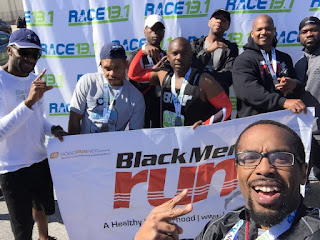 In Tennessee I was also on vacation so I was sightseeing instead of resting for and between races.
Sleep - I got plenty
Hydration was on point. I drank when I was thirsty. ( first I the Porto potty, it was a privilege)
Training-- I worked on hill training,... But I also worked on rest and running slower on easy days. You have to train hard on your hard or long workout days but rest days are rest days. Easy days are easy days.
Crowd-- it was a down and back race. On the way back everyone was really supportive. It was awesome.
Also not too crowded, although it was crowded for this race series.
2016 bgr black girls run black men run fitness greensboro half marathon north carolina race 13.1 running takeover women