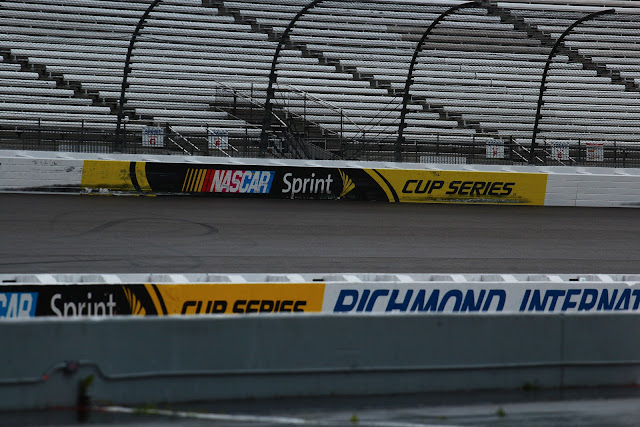 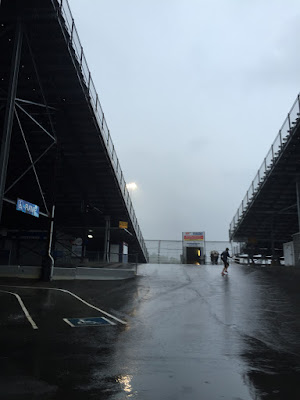 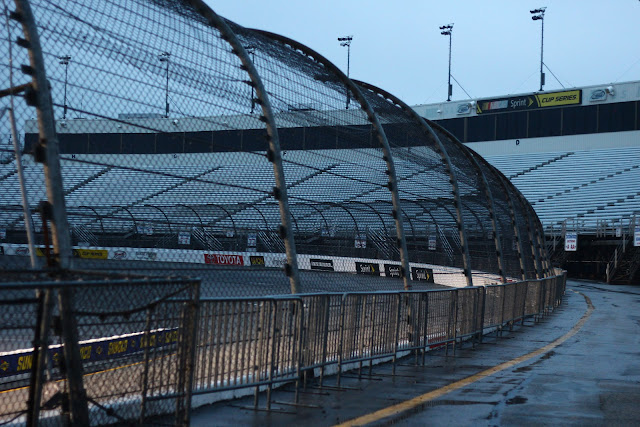 I got on the road and drove to Richmond in the middle of the night. At around 4:30 it starts to sprinkle, then rain, and then pour down on the highway. I had to slow town to about 50 mph in a 70mph zone. At that time, as I was trying to keep from hydroplaning.  I thought,..."Is this what I'm going to be running in?"
Long story short,...yes! 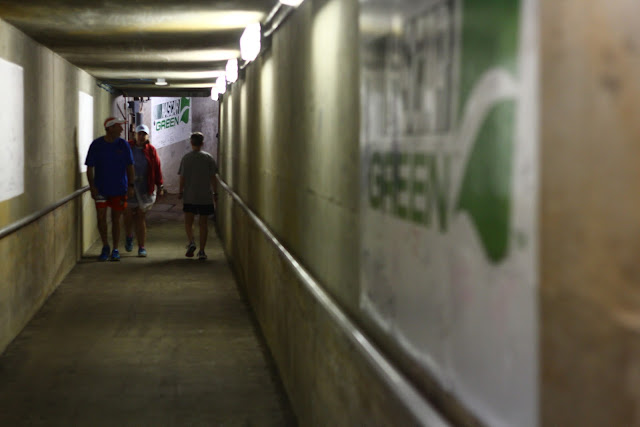 I wanted to do this race because I like NASCAR. I used to fall asleep on the couch on Sunday afternoons after church listening to drone of those engines. I have never been to a real race, but I thought it'd be cool to run on a race track... And it was.
You enter in infield through a cool pedestrian tunnel. The tunnel walls are filled with signatures of people who have walked through here. I didn't have a marker to add my name, but I wish I did. 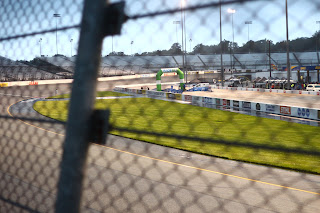 On race day, I'm sure the infield is much louder and filled with sounds of engines, air wrenches and torches. But this morning, all I could hear was the pitter patter of rain.
First a pit stop in the bathroom. Then the start of the race comes pretty quick. We did one full lap around the D shaped oval, then we went down an access tunnel onto the course which used a mix of access roads around the track, through parking lots and out onto the roads that surround the track.
Honestly, I wasn't thinking about hills, groups of people or anything really. I was focused on dodging puddles, defogging my glasses and just trying to see where I was going. Did this slow me down? Minimally. Some of the puddles were ankle deep and sometimes it wasn't the size of the puddle but the splash from one foot into the other that would get one foot wet. But I have a motto. Train in it, win in it. I never retreat to a treadmill because of a sprinkle. So, I had confidence in myself and even my shoes that I could still run fast in the rain. My shoes, the Brooks Launch 3 are the best shoes that I've ever taken out in the rain. They seemed to dry out within a few steps of each puddle. 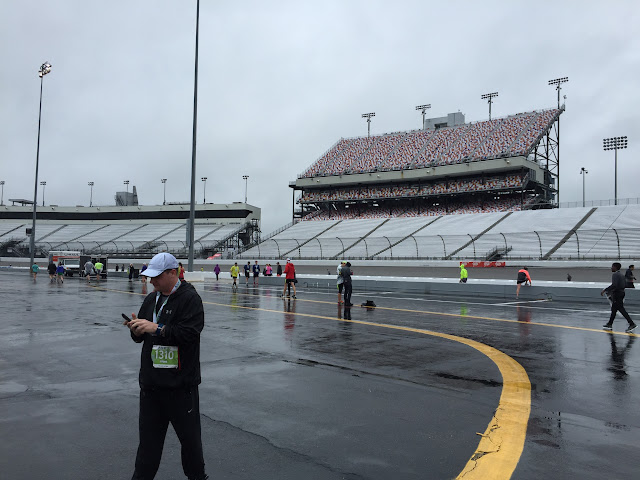 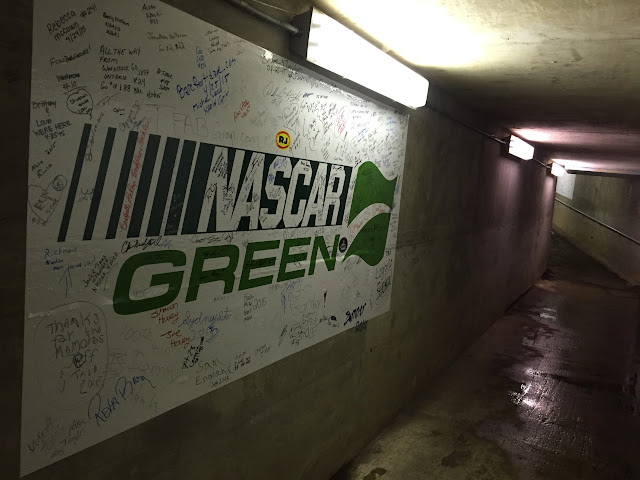 One other thing that helped me stay focused: headphones. I got some headphones in the mail just in time for the race from J&L Real on Amazon. I knew I needed something that could withstand the elements and these did not disappoint. I'm always nervous about using new things on race day, but I made an exception. 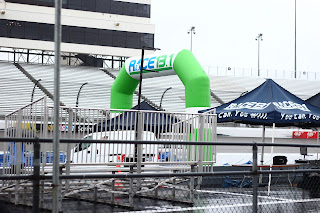 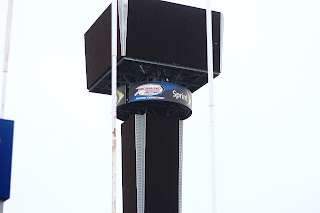 At times the rain was a light sprinkle, sometimes it was a steady rain and the were many times when it was a driving, downpour where all I could hear was the sound of oversized raindrops on my skull.
It might sound miserable, but who doesn't like to play in the rain? You only have to worry about lightning ( there wasn't any) and getting warm and dry when it's all done. I always wonder about the people who wear those plastic bag things to stay dry. Don't you sweat on the inside of that and get wet anyway? I'd rather have the sweat washed off of me.
Back to the race. It was a blur. I was following the 1:45 pacers in the beginning, then they left me. The first miles was a 7:55- a little too fast for my first mile. The 2nd mile was even faster- 7:48. Way too fast because that would be my fastest mile of the morning. I Ran up to the first out and back section and people were still passing me. Mile 3-8:09, 8:17, 8:21, 8:36, 8:36. It's only seconds. But seconds matter in every race. Then we ran up to the cemetery- another out and back section - and that's when it finally started to get quiet. Mike 8- 8:33, 9--8:24. Wider gaps between runners require more focus to maintain pace. I tried to push the pace, but didn't really have it in me. Mike 11 was my fastest in the second half of the race. The last mile was a sluggish 8:40. That should have been my fastest lap because it was a lap around the race track. Still, it was an awesome race. I have a new favorite pair of headphones and I found a new location for chafing. ( sad face)
The only thing missing this weekend was an actual race car or maybe some race car sound effects on the loud speaker.
Where is the next race? Race 13.1 Raleigh. I wish I could do Rock n Roll San Diego because it's on my birthday ... But the way my savings account is set up.....( insert joke here)
I'll be running at home. 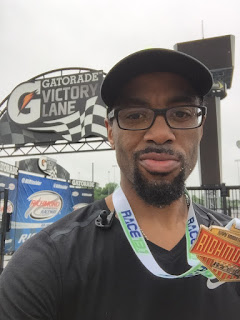 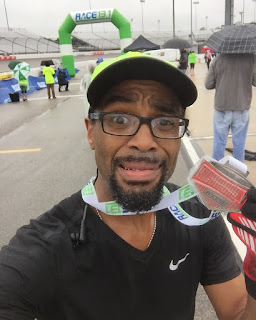 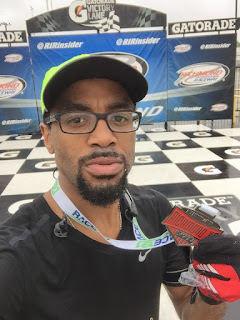