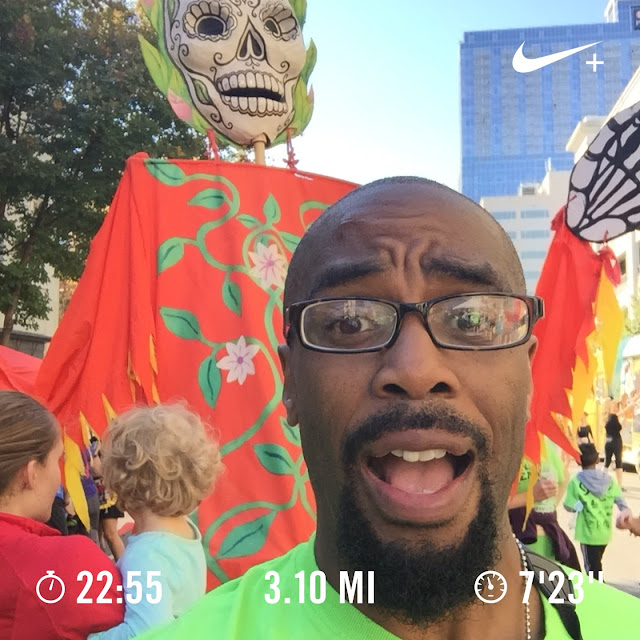 I don't normally sign up for a race at the last minute unless it's a 5k or I get peer pressured into it. This time it was both. I mentioned the race at work and boom,... a couple of minutes later, I'm running the Dia de Los Muertos 5k in Raleigh. It's a pretty cool race to celebrate a traditional Mexican holiday which is kind of like Halloween, ... but not really.  So, I didn't train for it. Didn't plan for it. It wasn't even on my radar,... So, I had to give myself a crash course on.. well the course. It starts out in Downtown Raleigh near the state Capitol building.. and makes it's way down through the historic Oakwood neighborhood and  through -- yes-- Historic Oakwood Cemetery. I really didn't think this one through. Dia De Los Muertos translatest to Day of the Dead. So, It's all beginning to make sense. 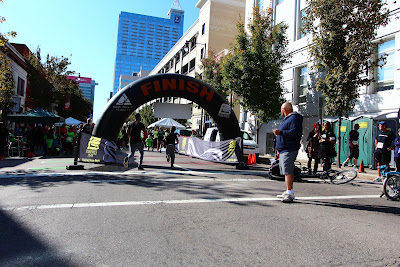 Race day sign up was easy. The weather was chilly, .... but not too cold. Perfect.
So, I noticed that there aren't too many faster runners around. mostly kids and walkers. So, my strategy at the start line is to get out front... right behind the leaders and stay with them as long as possible. Why? I think I found a dose of confidence after the race in Fayetteville. The split times surprised and impressed me. I didn't think i could keep such a fast pace for four miles. So, pushing a little harder for three miles shouldn't be a problem.
Boom, let's go. 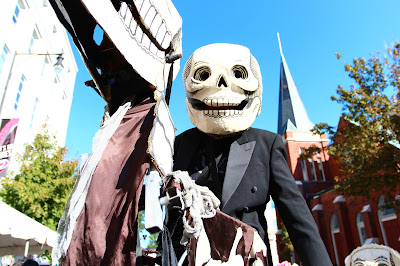 I don't think they ever tell anyone to run a race as hard as you can at the beginning. But that's what I did. I ran at my top pace without going into a full sprint. The first half mile was all down hill anyway. There was a nice hill to climb before we made the turn into the heart of Oakwood then It was downhill again. And yes... I'm aware.. that i'll have to climb those hills momentarily. I'd rather forget the run through the cemetery. This is at least the second race in the last year that took us through a cemetery. It is what it is. 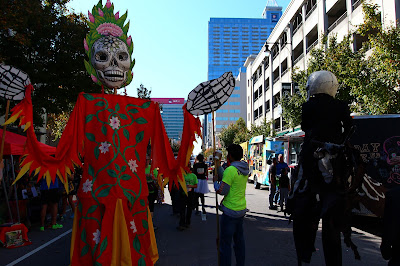 Aside from the headstones.. there were some lively hills in the cemetery. I made it out just in time to see the last walker going down the hill into the cemetery. Yup that's a big hill coming out of the cemetery. One of those sole sucking hills that would definitely have a mental impact on a young racer if it was placed within a longer race -- 10k, 13.1, 26.2.
But not today. I let the music in my ears give me the charge up this hill.
Take a deep breathe... relax for the downhill... and head back uphill for the finish.
I can't lie it was tough. I counted only 3 people to cheer us up this hill. One was a volunteer, One was in elementary school.. and the last one -- his mother. 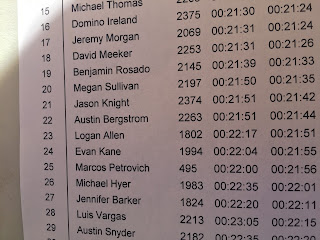 So, I focus on how much track I have left. As soon as I get within a half mile to go.... I turn it up. Okay,... So, this is when one guy tries to match my speed to either beat me or follow me in. I turn it all the way up... even with the uphill climb to the finish. But the funny thing is... once you get your knees up high and your arms pumping... It doesn't even feel like you're going up hill. I wasn't focused on the clock when i crossed the finish line.. but as soon as I looked back it said 22 minutes. It wasn't until the official timing results were released that I found out-- it was a  21.42 finish. My fastest 5k So far, thanks to the fast start.. and the guy who pushed me at the end. Good stuff. 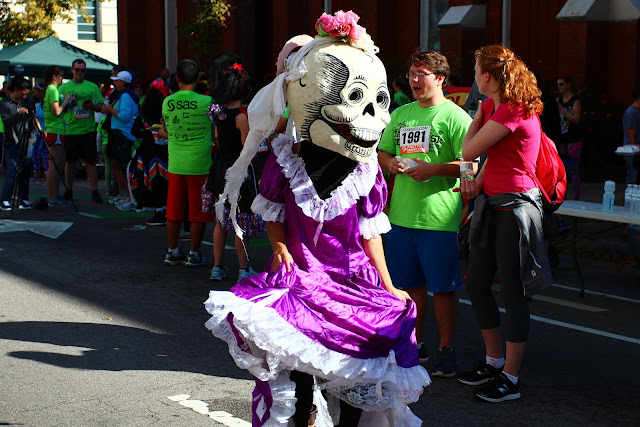 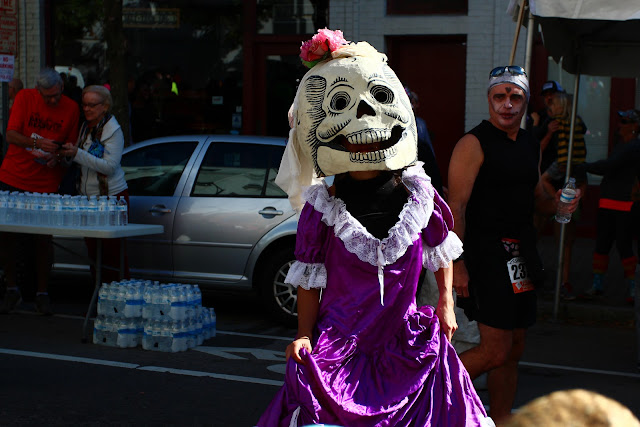 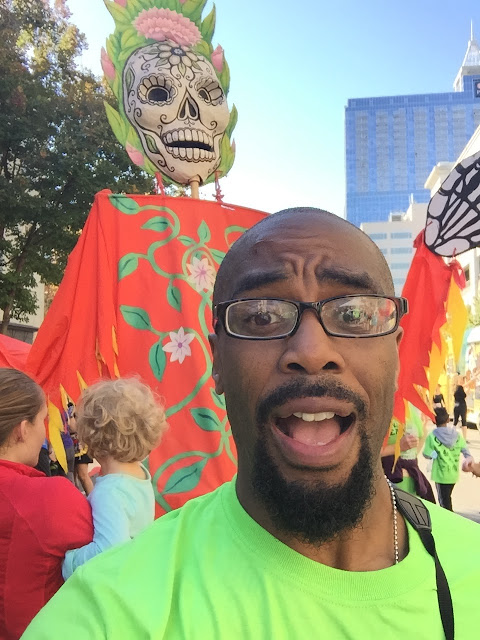 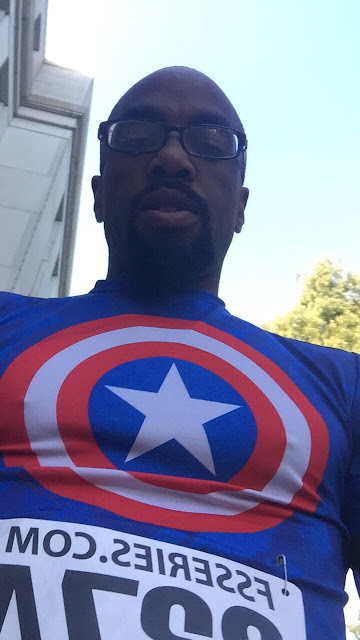 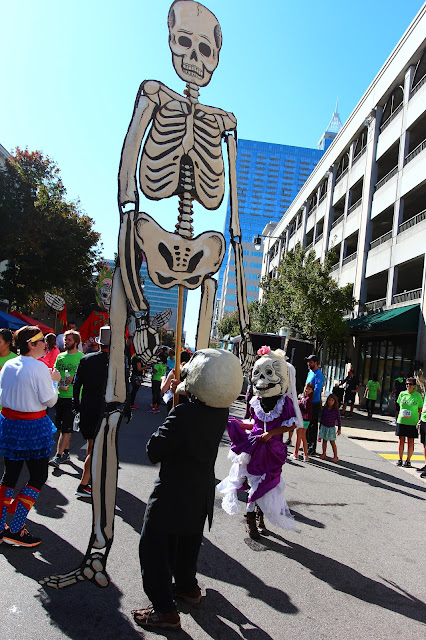 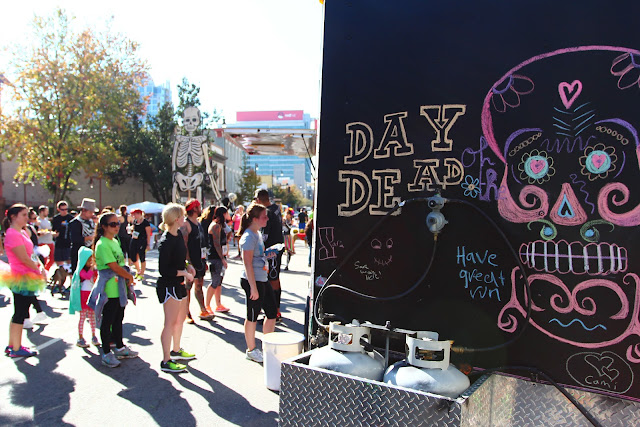 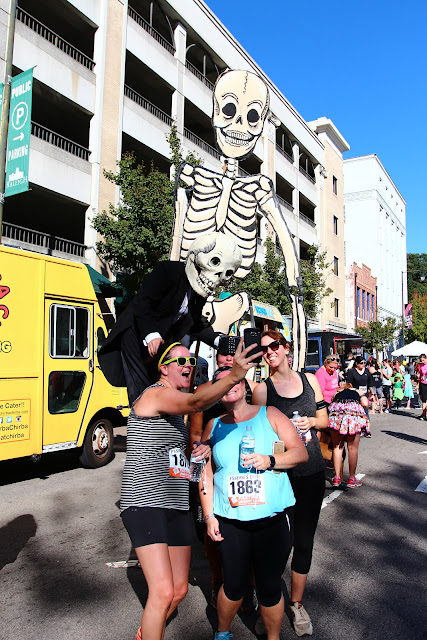 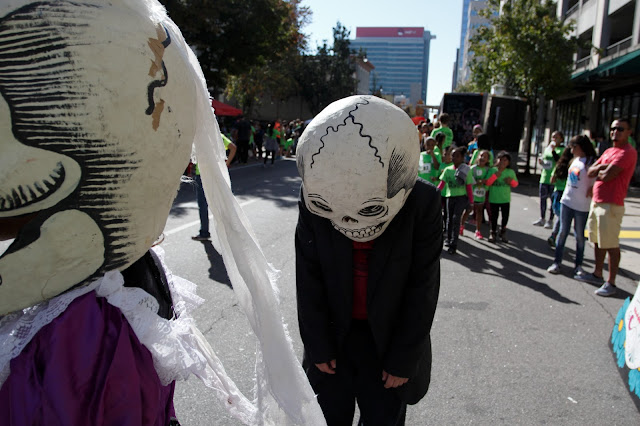 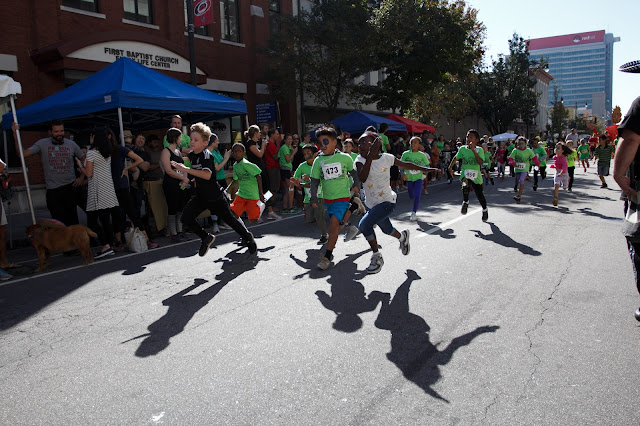