This has been a month of discovery for me. It's not that I didn't know anything about Black History (my history,) but I didn't know my Black History in such detail. Through some of the stories of great African Americans you feel their pain, their determination, their joy and sorry. It's kinds of like knowing the national anthem: you think you know the words until its Super Bowl Sunday and you have to sing it in front of 300 million people. In just researching this topic alone (Slave Trade,) I found some interesting tidbits that I wanted to explore further.

Today, I am discovering more about the Transatlantic slave trade. Some even call it Maafa- the Swahili word for Holocaust or great disaster. Holocaust is from the Greek  hólos meaning "whole" and kaustós meaning  "burnt."


Yes,  there were slaves in Africa before Europeans showed up.They would sell criminals, war captives and others to other tribes. There is a difference though. Once sold to a neighboring tribe or village, there was always a chance that the slave could earn his freedom or escape and return home.Once across the Atlantic, there was no return.
Africans were often sold by African slave dealers to European traders-- traded for alcohol guns and other goods....,
The Transatlantic slave trade took place between the 16th and 19th centuries.
They were brought to North and South America to build the two continents' Agriculture industry with their blood and sweat.. growing coffee, cocoa, cotton and rice. They also mined for gold, silver shopped wood and worked in homes as personal servants.
Many would die though before ever reaching American shores. Some estimate that 10-to 20% died in the middle passage. That amounts to between 1.2 and 2.4 million people. As many as 12 million did make the trip. The first slaves to arrive in the Americas stopped on the island of Hispaniola in 1502. That's now the island of  Haiti and the Dominican Republic.
I find it interesting that the first attempt to bring slaves to America failed. They were brought to U.S. shores near where some say is now Jamestown, South Carolina by Spaniards. The Slaves revolted against their masters getting help from Native Americans and the Spaniards retreated- abandoning the colony all together

But by the 17th Century (less than 100 years later) thousands of slaves would be arriving in Jamestown, Virginia. Later, though, some African Kings would refuse to sell any of their captives or criminals. King Jaja of Opobo and many of his people were captured for not doing business with slavers. His was an interesting story, because legend says he was sold into slavery as a child, earned his freedom, and rose to become that nation's King. So, You can see why he would staunchly appose the slavery of his own people. For that some called him the first civil rights activist. He lead the country to great prominence in the region by controlling the palm oil trade. Jaja was trick, exiled to Barbados.. then Sao Vincent, Cape Verde.
Ashanti King Agyeman Prempeh  also sacrificed his own freedom so that his people would not face collective slavery. After being offered "protection" from the British government he said, "My kingdom of Asante will never commit itself to any such policy of protection; Asante must remain independent as of old, and at the same time be friends with all white men." There is more to this story including the "War of the Golden Stool" exile and more. Just an amazing story. I am always inspired by stories of Victory for the little guy.
The Kings of other ethnic groups did strike a deal with slave traders. 45 Ethnic groups were taken to the Americas. The ten most prominent include... Elikia M’bokolo wrote in Le Monde diplomatique: "The African continent was bled of its human resources via all possible routes."

What got me interested in, thinking about and writing about the slave trade was a mention of this Charge against the United States government. It's an interesting and bold appeal to the United Nations whether you agree with the argument or not. 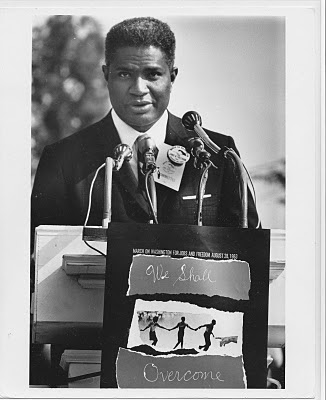 "Black men were brought to this country to serve an economy which needed
our labor. And even when slavery was over, there was still a need for us in
the American economy as cheap labor. We picked the cotton, dug the ditches,
shined the shoes, swept the floors, hustled the baggage, washed the clothes,
cleaned the toilets -- we did the dirty work for all America -- that was our
place, the place where the American economy needed us to be.
As long as we stayed in that place -- there at the bottom -- we were wel-
comed to love and work in America. The murder practiced against us then
was partial and selective. A limited genocide meant not so much to extermi-
nate
correct us, to use those of us who would not submit as examples of what could
happen to the rest of us. Those who objected to being kept in their "place" at
the bottom were beaten or killed for being uppity. Those who challenged our
racist overlords, claiming for themselves and for us our rights as men and as
citizens, were burned for being insolent; lynched to teach the rest of us
always to stay in our "place."
But a revolution of profoundest import is taking place in America. Every
year our economy produces more and more goods and services with fewer and
fewer men. Hard, unskilled work -- the kind nobody else wanted, that made
us so welcome in America, the kind of work that we "niggers" have always
done -- is fast disappearing. Even in the South -- in Mississippi for example --
95 per cent and more of the cotton is picked by machine. And in the North as
I write this, more than 30 per cent of black teenage youth is unemployed.
The point I am getting to is that for the first time, black labor is expend-
able, the American economy does not need it any more.

William L. Patterson
It is sometimes incorrectly thought that genocide means the complete 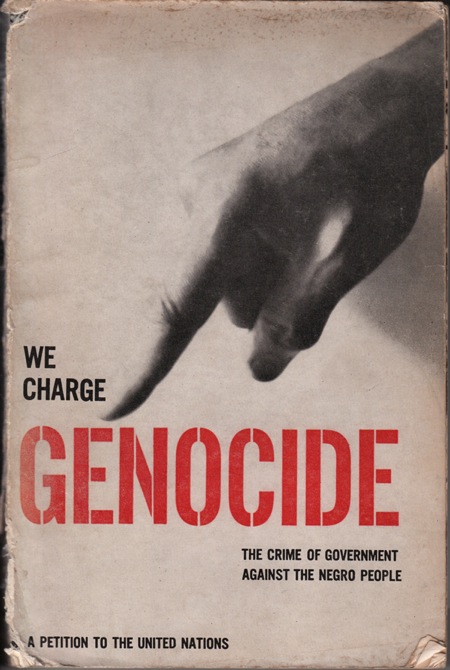 and definitive destruction of a race or people. The Genocide Conven-
tion, however, adopted by the General Assembly of the United Nations
on December 9, 1948, defines genocide as any killings on the basis of
race, or, in its specific words, as "killing members of the group." Any
intent to destroy, in whole or in part, a national, racial, ethnic or
religious group is genocide, according to the Convention. Thus, the
Convention states, "causing serious bodily or mental harm to members
of the group" is genocide as well as "killing members of the group."
We maintain, therefore, that the oppressed Negro citizens of the
United States, segregated, discriminated against and long the target of
violence, suffer from genocide as the result of the consistent, conscious,
unified policies of every branch of government.
The Civil Rights Congress has prepared and submits this petition to
the General Assembly of the United Nations on behalf of the Negro peo-
ple in the interest of peace and democracy, charging the Government
of the United States of America with violation of the Charter of the
United Nations and the Convention on the Prevention and Punishment
of the Crime of Genocide.

Miseducation in ghetto schools is psychologically more disturbing than in
"educational" institutions generally. The misery and squalor of the black
ghetto slums beggar description. A false brand of criminality is constantly
stamped on the brow of black youth by the courts and systematically kept
there creating the fiction that blacks are a criminally minded people. Unem-
ployment and underemployment are infinitely higher among blacks due to
discrimination in hiring policies and the low technical development afforded
their youth. The ghetto has been made a cesspool for those who traffic in
narcotics in a diabolical attempt to destroy the physical being of blacks.
White ideologists proclaim those conditions are as blacks want them to be.
White ideologists skillfully and cunningly twist facts that expose the evils of
racism to enable them to assert the inherent inferiority of blacks. Thus they
seek to give credence to the myths of white superiority. Force and violence
systematically and consistently employed to quell the righteous anger of
blacks is justified by calling murder an exercise of "law and order." Thus the
lies against blacks are propped up ideologically. We have an economy that
dehumanizes those who accept and support it as well as its foremost victims.